Think We’ve Been Experiencing More Flooding and Erosion the Past Decade? The Data Agrees With You. 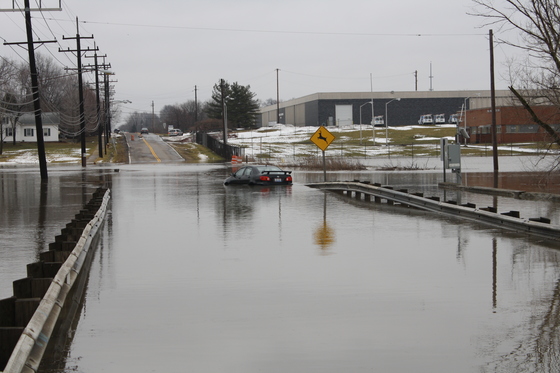 In my work as a watershed coordinator for Cuyahoga SWCD, I see and hear a lot of anecdotal evidence that Northeast Ohio has been experiencing more big storms that cause flooding and erosion over the past decade or so. On site visits to residential properties to assist with erosion problems, I’ll hear from long-time streamside property owners that tell me they never had any erosion problems until a couple years ago. Or how they used to be able to step across the creek in the back yard, but how now the stream channel is 15 feet wide. Or from a city service director who dreads every time there’s a storm in the weather forecast, knowing that if it’s a big one, like seemingly so many have been lately, that she’ll be bombarded with calls from frustrated residents.

Prompted by a presentation by Dr. John Peck from the University of Akron that examined a similar phenomenon in the Cuyahoga River, I decided to go back and search through the United States Geological Survey (USGS) Stream Gage records for the Rocky River to see if the flow records support the idea that we’ve been having extreme flows more frequently. Short answer: they do.

But first, a little background on USGS Stream Gages. Installed on streams and rivers throughout the country, these gages can measure a variety of parameters, including water temperature, dissolved oxygen levels, suspended solids, etc. But their main purpose is to measure stream flow, or discharge. Discharge is the volume of water flowing past the gage in a given amount of time. It is typical measured in cubic feet per second (cfs). You can see realtime data from USGS gages in Ohio here: http://waterdata.usgs.gov/oh/nwis/rt.

The USGS gage on the Rocky River is located at Cedar Point Rd., just downstream of the confluence of the East and West Branches of the Rocky River. It has been in operation since 1923. 6 of the 13 highest discharge measurements ever recorded in those 83 years of operation have occurred since 2004, including one each on 2011, 2012, 2013, and 2014. The May 12, 2014 storm produced the highest discharge reading ever recorded at the Rocky River USGS gage, topping out at 14,700 cfs.

So, what caused these higher discharges? Two main factors to consider are impervious surface cover and rainfall intensity. For one thing, the impervious surface cover in the watershed has increased significantly since the early and mid-20th century. The increase since 2004, though, is relatively small. That leaves rainfall intensity. Many climate models suggest that Northeast Ohio will begin to see less frequent more intense rainfall events as a result of global climate change. Although this analysis of stream gage data is cursory, it seems to suggest that we are indeed experiencing higher intensity rainfall at more frequent intervals.