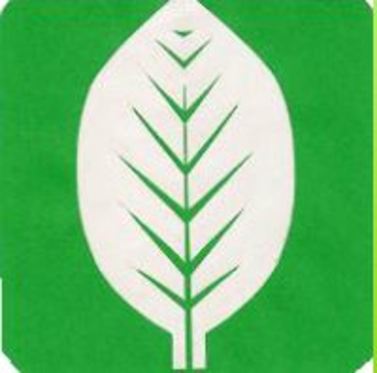 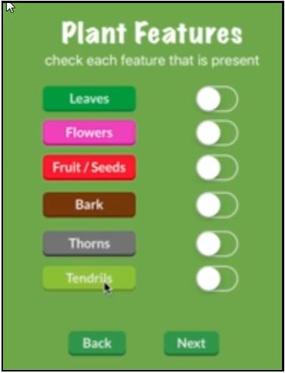 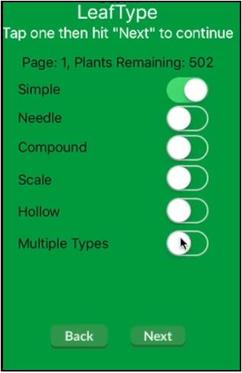 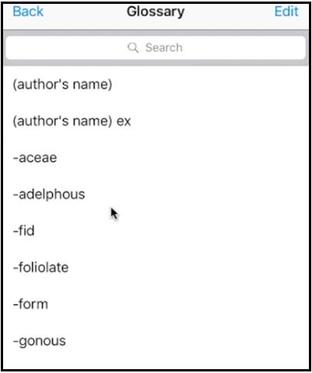 Wild Plant ID is a project of Friends of Euclid Creek. It is an app (application) for smartphones to help people with no botanical training to identify wild plants anywhere within the Euclid Creek watershed. The app begins by asking the user to select any of six features (leaves, flowers, fruit, bark, thorns and/or tendrils) found on the plant to be identified (’Plant Features’ graphic to right). The app will then lead the user through a series of attribute screens from which selections are made about the plants’ form and structure. For each feature selected there will be between 3 and 6 attribute screens (e.g. ‘Leaf Type’ graphic to right) presented. Each attribute screen will have a short list of characteristics of each attribute and include an illustration and optional pop-up definition (’Glossary’ graphic to right) to help with the choice. After the choice is made on each attribute screen the identity of the plant will be presented. Since all known wild plants within the watershed are included, all identification attempts should result in an identification. There will also be additional information available about the plant such as photos (to help confirm identification), rarity status, uses, and relationships to use and its environment.

The idea for a computer application to help amateurs identify plants in the wild initially grew out of work to database the 16,000 herbarium specimens collected by Dr. George Wilder at Cleveland State University (CSU). During this work, it became apparent that a computer could be a really useful tool in plant identification. With a belief that most of the amateur plant identification books tried to cover too wide an area, such as the entire eastern United States, it was decided to create an app which focused on identifying all the wild plants in a more limited, biologically-defined area. The Euclid Creek watershed was selected for the first prototype since it had a number of protected wild areas and included a wide variety of habitats. One of these areas, Highland Heights Community Park, had already been the subject of a thesis by Suneeti Jog, a PhD candidate in biology at CSU.

As the design continued to evolve it became obvious that there was one missing ingredient- the computer code to make the app work on what now was being called a smartphone. Fortunately, in 2014 it was learned that the Excel TECC program at Mayfield High School was looking for community-based projects for their computer science students to get involved in. They selected Wild Plant ID as one of these projects. By early November 2016, the coding for the first prototype of the Wild Plant ID app was created by students David Bryson and Max Koltan. Under the guidance of Ron Suchy, their instructor/advisor, they prepared a 3-minute YouTube video describing the app and illustrating how it would work on an iPhone. That video was used as their submission to the Congressional App Challenge. Their video may be viewed at the following link: https://www.youtube.com/watch?v=HPopejxRTQY. Even though there is still some coding work to complete the prototype, it is likely that the app will be finalized by late March 2017 so that it can be submitted to the CoolTech Challenge. Website address: http://exceltecc-itp.org/wildplantID_root/index.html.